Against the critics of Catholic healthcare 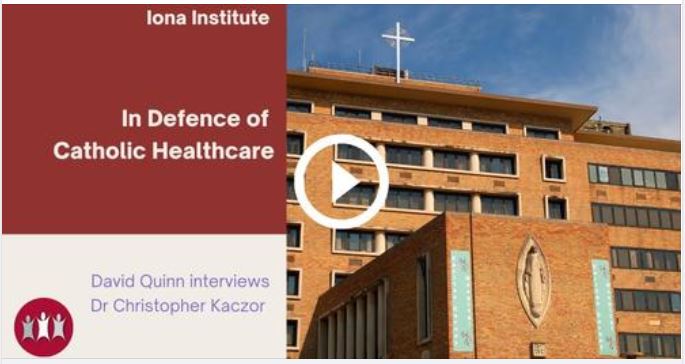 Catholic healthcare has been roundly attacked in the context of the row over the relocation of the National Maternity Hospital. Are the attacks deserved? The short answer is, no. In fact, secular healthcare with its abandonment of the most basic objective of medicine, ‘first, do no harm’, is what should be under the spotlight.

In our new video, David Quinn of The Iona Institute interviews Dr Christopher Kaczor, a professor of philosophy at Loyola Marymount University in California, about Catholic healthcare.

You can watch the interview by clicking here .

Here is flavour of what he had to say.

Dr Kaczor on the origins of Catholic healthcare

“When we think about Catholic healthcare I think it’s important to begin at the beginning. So in the life of Jesus the gospels report that he went about healing many people, healing lepers, healing people that were born blind, healing the woman who had a bleeding [illness].”

“Jesus actually commanded his apostles also to heal the sick and that was part of their first mission.  Early Christians were very much animated by the idea that they ought to love their neighbour as themselves and so you know when we’re sick…we want someone to care for us…early Christianity really began this ministry of healing.”

“You find, for instance, after the Nicene council [of the 4th century] that in all the towns that had cathedrals also hospitals were established. Saint John Chrysostom established a number of hospitals  in the place where he was bishop and all of this is public knowledge…Part of the distinctiveness of Christian healthcare was that it was open to everyone. Early Christians took care of Christians and also took care of non-Christians. They risked their own lives taking care of people that were victims of plagues caring for those that were sick and dying. This has really been a very central part of Christian outreach and it’s really an extension of the Christian idea that we should love our neighbour as ourselves.”

On the overlap between Catholic and Hippocratic medicine

“Catholic healthcare is founded on a fundamental principle that all human beings have intrinsic dignity and value.”

“Catholic healthcare has an overlap with Hippocratic medicine in that the Oath of Hippocrates, the medical oath that’s taken by or was taken by many physicians includes a provision not to kill at the beginning of life through abortion and also not to kill at the end of life and this is really based again on this idea that human beings have this intrinsic value and dignity. In secular terms you might talk about this as universal human rights rights.”

“Every human being deserves a fundamental care and that’s really the role of Hippocratic medicine too, to heal right rather than to harm.”

On the challenge of unplanned pregnancies

“An unplanned pregnancy can be a very challenging situation I mean I know from my own experience. When I was in college my girlfriend got pregnant and this caused me a lot of anxiety and a lot of challenge in my life. So, I totally get that [feeling of crisis] and that’s a normal thing and I get too from my own experience that my own mother conceived me in an unplanned pregnancy and she went to a woman’s home run by nuns. That’s the origin of my own life that she my mother was cared for by those those religious sisters who helped her through a difficult situation and gave me a chance to be alive. But I do understand because I’ve talked to my birth mother and I do understand because I myself went through it the kind of anxieties, the kind of challenge that an unplanned pregnancy can [cause].”

On attempts to undermine conscientious objection

“Secondly, what you’re going to do is exclude some of the best practitioners of medicine…Now if you force a removal of conscientious objection what’s going to happen is those people will be forced out of medicine and what will that do…if we have the same demand for medicine but we have fewer practitioners that’s going to do is raise the cost of medicine for everybody because there’s fewer medical professionals that can provide the services. But it’s also going to…decrease the quality [of healthcare workers] and the reason is that if you now have a new litmus test everybody has to have these views on abortion and euthanasia to be in medicine well what that’s going to do is now exclude some people that otherwise would have been in medicine.”