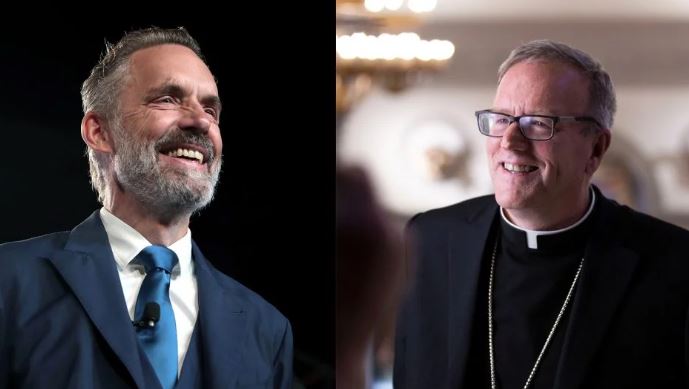 Jordan Peterson recently interviewed Bishop Robert Barron of Word on Fire in the United States. Bishop Barron has built up a big online following as a defender of the reasonableness of the Catholic faith. Peterson is basically a defender of the Western moral tradition. There is obviously a big overlap between this tradition and Catholicism, so the interview should have been a meeting of minds, and it was, even though Peterson is an agnostic.

The discussion (it was more that than an interview), lasted over an hour and a half and covered a lot of ground, but it kept returning to probably Peterson’s favourite subject; the inevitability of suffering, how we should respond to it, how a great deal of suffering is self-inflicted, and how we tend to avoid the topic because it is too painful to confront, which only makes things worse in the long-term.

Bishop Barron has a genial approach almost to a fault, whereas Peterson is more straight-talking and gruff, if that’s the right word.

In the context of personal fault and responsibility the two men spoke about the need to balance mercy and standards. Bishop Barron rightly pointed out that the Church is still living down an overemphasis on standards in the past. The result is that priests of his generation have now moved the dial too much towards mercy and have adopted a sort of ‘I’m ok, you’re ok’ approach to moral issues that simply isn’t challenging enough and can fail people very badly. It therefore fails on its own pastoral terms.

Maybe Bishop Barron’s geniality is itself a reaction against the severity of some priests in the past.

Unfortunately, every priest, and also every lay person who defends Catholic teaching now has legacy issues they labour under resulting from the scandals and the Church’s often authoritarian behaviour. This is simply a fact. A fair number of prominent Catholics say much the same things as Jordan Peterson on various issues, but the legacy issues mean they often aren’t listened to.

Peterson does not have these legacy issues because he is neither Catholic nor religious. Mind you, he is still roundly attacked for challenging the politically correct culture and this inevitably means he is routinely called a ‘bigot’ and especially a misogynist. Nonetheless he cannot be associated with (for example) the horrendous sex abuse scandals and that is a big advantage when you are preaching an essentially traditional moral message.

On that point, it’s a pity the two men did not discuss the scandals. I’d like to have heard what Peterson has to say about them. For that matter, I’d like to have heard him on the image of the Church today, its history, what it says about marriage, sexual morality, suffering, and of course, Jesus Christ. I’d also like to have heard him on the subject of the male-only priesthood, the role of the priest as a spiritual father, and the self-presentation of God as ‘Father’. What difference does he think it would make if God was presented as ‘Mother’, or as neither mother nor father?

Peterson appeals hugely to millions of young men, including the thousands who came out to hear him last year in Ireland, with his message of moral responsibility and his willingness to call a spade a spade. He is a kind of spiritual father to them. (Parents should be delighted when their sons watch Peterson and listen to his message of moral responsibility, considering what they might be watching instead).

The priest is supposed to be a spiritual father, of course, but many cannot fulfil this role. In some cases, it’s because the legacy issues get in the way, and in others it’s because many priests have become too ‘nice’, too unchallenging. If fathers are meant, traditionally, to be the more challenging of the two parents, and the mothers the more comforting, then too many priests have become more like mother-figures to their congregations instead of father-figures, which is ironic when you consider the prohibition against ordaining women. But that’s a whole other story.