Bringing hope to the persecuted Christians of Iraq 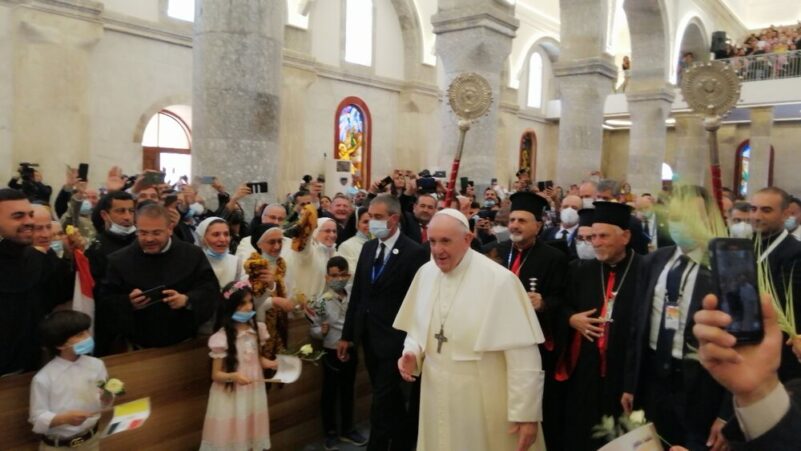 Pope Francis has just returned from an historic visit to Iraq where Christians have been savagely persecuted and driven from their homes. His trip was a very necessary act of solidarity. He will have also seen the work done by organisations like Aid to the Church in Need in helping Christians to rebuild their lives there.

Before the US invasion of 2003 and the fall of Saddam Hussein, there were about 1.4 million Christians in Iraq, corresponding to 6pc of the overall population. This is now estimated to be just 250,000. Among all Christians, Chaldean Catholics are the biggest denomination (67%). They have been there since almost the earliest days of Christianity. They are the descendants of the pre-Arab peoples of the area.

Under Saddam Hussein, a brutal dictator otherwise, Christians were tolerated so long as they didn’t get in his way. One of them, Tariq Aziz, was his deputy and Foreign Minister.

It is almost impossible to list all the attacks that Iraqi Christians have suffered in recent times.

In August 2004, six churches in Baghdad and Mosul were bombed simultaneously by Sunni militants. Thirty more churches were attacked later. Sayidat al-Nejat Syriac Catholic Cathedral in Baghdad, one of the churches bombed, was visited by Pope Francis on the day of his arrival in Iraq.

In 2007, Ragheed Aziz Ganni, a Chaldean Catholic priest who had studied at the Irish seminary in Rome, and three deacons, were killed in Mosul after the celebration of Mass.

In June 2014, Mosul, the second biggest city in Iraq, was taken by ISIS, which also announced a new Caliphate. Christians were forced to convert to Islam or to leave the city.

Mosul had previously been the city in Iraq with the largest number of Christians but currently only 70 Christian families are still there, down from 2,000 pre-ISIS, with the majority too scared to return. When Pope Francis visited the destroyed city, he was welcomed by the last remaining priest in Mosul, Fr Raid Adel Kallo of the Syriac Catholic Church.

In August 2014, ISIS invaded the Nineveh Plains in northern Iraq and about 120,000 Christians fled to areas controlled by the Kurds. With the end of ISIS in 2017, some have returned to their original cities but, still nowadays, most of the remaining Iraqi Christians are in Kurdish-controlled areas, which are considered safer. An estimated 330,000 went to Syria.

Aid to the Church in Need (ACN) is an organisation that has helped the local populations to go back to their homes. ACN had been working in Iraq since 1972 and between 2011-2020, ACN provided 49.5 million euro in aid to the Church there.

ACN donated €48.23 million to reestablish the Christian presence in Iraq, helping particularly the three main Christian denominations (Chaldean, Syriac Catholic and Syriac Orthodox) to create the Nineveh Reconstruction Committee with the purpose of assisting them to return to their original communities.

The symbol of this reconstruction is the Syriac Catholic Cathedral of the Immaculate Conception in the city of Qaraqosh, near Mosul, that Pope Francis visited on Sunday. The church had been severely damaged by members of ISIS. When they left in 2016, they burnt all the furniture, plus the ancient prayer books and manuscripts. They blasted the watch tower and damaged the ceiling of the cathedral.

ACN helped with the reconstruction not only of the church but also of the houses of the local Christians, to support them in recreating the local community.

ACN also decided to invest in the future of young Iraqi Christians, pledging 1.5 million euro in a new programme for the Catholic University of Erbil.

Erbil is the capital of the autonomous Kurdish region of Iraq, where much of the remaining Iraqi Christian population now live.

Head of Projects for ACN is Irish-born Regina Lynch who traveled with the Pope. She reported the scenes of celebration: “The joy of the people was catching. Thousands lined the streets to see the pope as he drove past. I saw religious sisters dancing. These were people who had come back after being forced to leave their homes because of ISIS. What the pope saw here were truly the living stones of the Church in Iraq.”

The visit of the Pope in these troubled areas has brought hope to those who are working to re-establish the Christian presence in Iraq after so much suffering.