The practice of euthanasia in the Netherlands bares a disturbing comparison with the Nazi era in Germany because it is recreating the category of life ‘deemed unworthy of life’. This is a opinion of a writer in a leading medical journal, especially as the Netherlands allows people who are not dying to avail of assisted suicide and euthanasia.

Writing for the JAMAL Internal Medicine journal [1] in the US, geriatrician Dr Diane E. Meier, says that the extension of ‘Physician-Assisted-Death’ (PAD) to those who are sick, but are not terminally ill, carries definite echoes of the past because it ‘socially validates’ the idea that some lives are more worthy of the investment required to preserve them than others.

Dr Meier was commenting on a study about patients with multiple geriatric conditions [1] in the Netherlands, published in December last year in the same Journal. The study found that their suffering wasn’t simply physical, but that these elderly patients feared further decline and didn’t want to become dependent or lose control over their situation. None of the patients suffered life-threatening conditions but they all requested, and obtained, death by assisted suicide or euthanasia.

In the Netherlands, there has been an increase in euthanasia performed on patients with dementia, psychiatric disorders or multiple geriatric conditions in recent years.

This should cause alarm, according to Dr Meier. She writes: “Once access to PAD becomes legal, when does a right becomes an obligation, especially when families are strained and society denies patients and families the resources needed to receive safe and reliable care?”

She warns that access to euthanasia comes close to “social validation, supported by policy, that some lives are no longer worth the investment required to preserve them – the implicit belief that both the individual and society would be better off if the patient were dead”

Predictably enough, her comparison with the Nazi era has been criticised as inappropriate by two letters to the journal signed by a number of Dutch doctors, but Dr Meier replied [2] that history teaches us that acting on the belief that some lives are unworthy of life is not a one-time-only event. “Extreme caution is necessary when we empower physicians to take life”.

In addition, while we must be very slow to compare any situation with Nazi Germany, there cannot be a complete bar on comparisons except when the situation is exactly as bad as in the Nazi era.

The fact is that we are back to deciding that some lives are less worthy of life than others, even when that is a self-evaluation.

Dr Meier highlighted [2] that in the Netherlands doctors must follow only vague criteria before administering euthanasia and only 75% of cases are reported, as non-reporting is rarely punished. Moreover, euthanasia in “children, people with mental illness, and dementia further illustrates the impossibility of limiting the practice and safeguarding vulnerable patients once it is permissible”

The Netherlands is often presented as a model for public policies but evidence proves instead that we should not repeat their mistakes.

This is the case not only for euthanasia but also for abortion.

Abortion rates there are still low by comparison with Sweden and the UK, but they continue to grow, according to a new report [3]. The abortion rate (number of abortions per woman) and ratio (number per pregnancy) have never been so high. 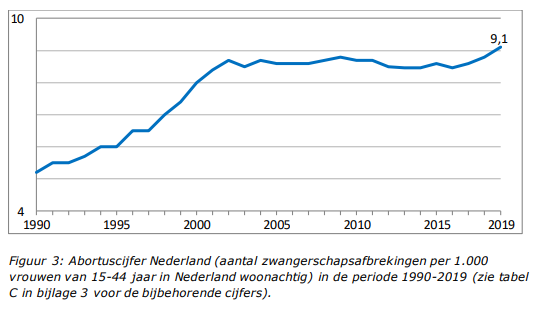 The report also showed that 17 Irish women had an abortion in the Netherlands in 2019. There were 18 in 2018. This means that there was no significant difference in numbers after the referendum and the introduction of abortion in Ireland.