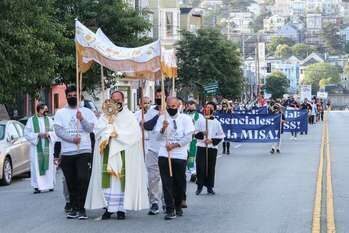 In the Republic of Ireland right now, people cannot attend public worship. The only other region in Europe with similar restrictions at the time of writing appears to be Wales. NPHET regards public worship as “less important” in the context of a pandemic.

Everywhere in Europe and in America, there are restrictions on how many can attend, and almost no one objects to this. But when the limits on attendance becomes too great, or public worship is stopped altogether, then it is reasonable to protest, especially when there is no evidence that well-run churches are responsible for infection outbreaks.

In the US, Catholic Bishops in New York and San Francisco have challenged the restrictions to religious celebrations imposed by the local authorities.

On October 8, for example, the Catholic Diocese of Brooklyn filed a federal lawsuit against Governor Andrew Cuomo because in some zones of New York, religious services are restricted to a maximum of 33pc of a church’s capacity or no more than 25 people.

In an official statement, Bishop Nicholas DiMarzio said: “The state has completely disregarded the fact that our safety protocols have worked and it is an insult to once again penalize all those who have made the safe return to church work.”

Bishop DiMarzio clarified that the diocese’s legal challenge to the state of New York is not about just just about numbers , but it is also about religious freedom and the classification of churches by the State as “non-essential” businesses, something that has happened here as well, despite Constitutional protections for religious freedom.

“Going to church should absolutely be considered essential. We should not be grouped with non-essential services like theaters and recreational facilities.”, said the Bishop.

Last Friday, when the Court ruled against the Diocese of Brooklyn. The judge in the case, Nicholas Garaufis said that the state did not unlawfully single out religion for its restrictions, noting that its rules applied to other non-religious gatherings as well.”

At the same time, the judge praised the diocese for having “been an exemplar of community leadership” that “at each step … has been ahead of the curve, enforcing stricter safety protocols than the State required at the given moment.”

In response, Bishop DiMarzio commented: “Despite this loss, we will continue to press our leaders for policies that consider the individual circumstances of houses of worship. We will also continue to advocate for places of worship to be classified as essential, for there is nothing more necessary today than a community of believers, united in prayer, asking the Lord to end this pandemic.”

In San Francisco, the restrictions adopted in August were even more severe than in New York: indoor services were suspended while outdoor worship was limited to 12 people, including the celebrant. Only one person at a time could pray in a church, according to the guidance.

At the beginning of September, Mayor London Breed announced that at the end of the month places of worship could reopen for indoor celebrations but with a limited capacity of 25pc and up to 25 people.

The archbishop of San Francisco, Salvatore Cordileone, noted that in the US people don’t have a constitutional right to a haircut but they have a constitutional right to exercise their religion. In piece in the Washington Post he wrote: “We Catholics respect legitimate authority, and we recognize that the government has a right to impose reasonable public health rules, just as we recognize its right to issue safety codes for our church buildings. But when government asserts authority over the church’s very right to worship, it crosses a line. Our fundamental rights do not come from the state. As the authors of our Declaration of Independence put it, they are ‘self-evident’, that is, they come from God.”

These are strong words that reaffirm the primacy of religious belief and practice, which can be limited only temporarily and in exceptional circumstances.

Archbishop Cordileone announced a plan for Eucharistic Processions in San Francisco. One took place on September 20. More than 35,000 people signed a petition opposing the unfair restrictions on the Mass.

On September 26, the Department of Justice urged the Mayor of San Francisco to open up places of worship. “No government in this free country can attack religion by transforming a house of worship arbitrarily into a place for solitary confinement. People of faith go to churches, synagogues, mosques, and other places to worship with their fellow believers, and they can do so lawfully because the First Amendment to the United States Constitution makes illegal any effort by government to prohibit the free exercise of religion,” said Assistant Attorney General Eric Dreiband.

Following these requests, at the end of the month Mayor Breed eased some restrictions. Now up to 100 people can gather in churches and other religious venues and outdoor services are allowed to have up to 200 attendants.

Archbishop Cordileone thanked the Mayor for “recognizing that faith is essential” and for responding to her constituents’ call. He acknowledged the work of those who campaigned with him and said that their struggle will continue as the State of California limits indoor worship to 100 people and this has to be challenged. “We will not accept believers being treated more severely than other, comparable secular activities.”

Will any such efforts be made by religious leaders here in Ireland?