How religious sisters are the real founders of modern nursing 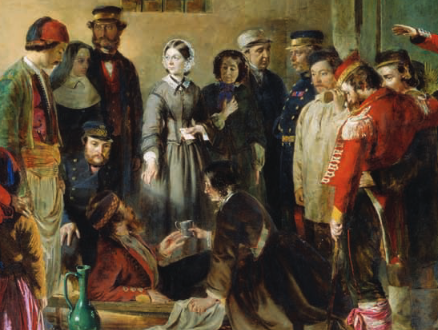 On Tuesday, we celebrated International Nurses Day, which coincides with the birthday of Florence Nightingale. She is regarded as a founder of modern nursing after she became famous for her work during the Crimean War of the 1850s. What has been largely forgotten is that she took inspiration from the works of medical nuns, who are really the founders of modern nursing.

For centuries, the monasteries had offered medical and nursing services but with the Reformation, and particularly after King Henry VIII closed them down in 1536, this tradition was practically lost in England and Ireland.

During the Crimean War (1854-56) it became evident that while the French soldiers were attended by the Sisters of Charity, the British troops had no equivalent assistance. And this is when Florence Nightingale, who had observed nursing from the Sisters of Charity in France and Egypt, re-established a proper professional service. Among the small initial group that served the Scutari hospital in Crimea led by her there were ten Catholic nuns and ten Anglican nuns, plus about ten lay-women.

When the British War Office was looking for skilled nurses, it found them mostly among the Irish Sisters of Mercy operating in London. They were the first to leave and, when on their way, they were met by Florence Nightingale, with a second group of nurses. Nightingale became their director, in spite of the fact that she was less experienced than the nuns.

One of them was Mary Clare Moore, who had joined the Sisters of Mercy at their foundation. When in 1832 the first cholera epidemic hit Dublin, Mary Clare Moore worked along with Catherine McAuley, the founders of the Sisters of Mercy, and received an intensive nursing training. She continued to assist the poor in the tenements and workhouses of Dublin and London, and she brought her professional experience to Crimea when she joined Florence Nightingale in 1854 and together went to Scutari.

The two worked in concert and when Mary Clare had to return to England due to illness, Florence wrote to her: “You were far above me in fitness for the General Superintendency, both in worldly talent of administration, and far more in the spiritual qualifications which God values in a superior.”

The Irish nun was a great source of inspiration for Florence Nightingale and they remained intimate friends for the rest of their lives. There were other Sisters of Mercy operating in Crimea with the British troops.

When  Mother  Vincent  Whitty, the superior at Baggot Street, responded to the call for nurses by the British War Office, she wrote: “We know it must be difficult, if not impossible, to procure for our country-men engaged as soldiers in the East, the skilful nurses speaking their own language and sympathising with their habits and feelings, and that care and attention in a strange land which would be so well supplied at home.

“Attendance on the sick, as you are aware, is part of the work of our Institute, and sad experience amongst the poor has convinced us that even with the advantages of medical aid, many valuable lives are lost for want of careful nursing.”

The tradition of “careful nursing” the Sisters of Mercy belong to, goes back to the beginning of Christianity. The first Christian woman recorded as dedicating herself to the care of the sick was Phoebe, mentioned by Saint Paul to his letter to the Romans.

A Roman noblewoman, Fabiola, a Christian, is recorded as having founded the first civilian hospital in the history of the Roman Empire in the 4th century.

This tradition lasted for centuries and it was reestablished in Ireland by the works of Catherine McAuley and her congregation, but also of Mary Aikenhead and her Irish Sisters of Charity, who set up the first hospital run by nuns in the English speaking world, in 1834, namely St Vincent’s hospital. This was originally on St Stephen’s Green in Dublin and later moved to Blackrock. The Sisters have now relinquished control of the hospital to a trust.

It is this tradition that Florence Nightingale relied on and, in celebrating her achievements, we should also remember the nuns who preceded her. They are the real mothers of modern nursing.

(Dr Therese C. Mehaan, who has formed generations of nurses in UCD, runs the website Careful Nursing, containing interesting articles on the history of this profession and its Christian roots.)