How the prevalence of abortion increased in Portugal post-liberalisation 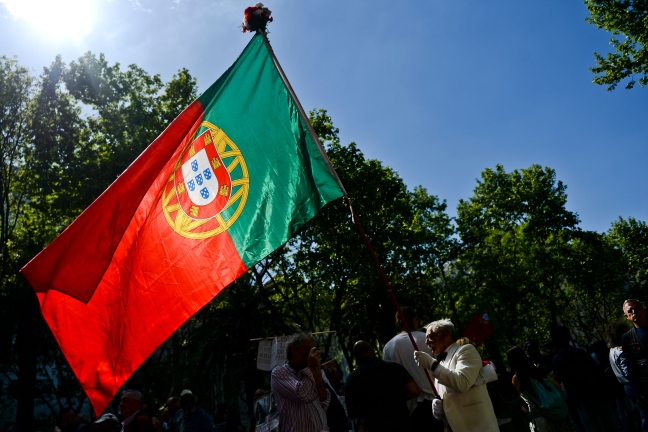 The abortion law proposed by our Government should the 8th be repealed would be close in kind to the Portuguese law. Post-liberalisation of its law in 2007, the prevalence of abortion in Portugal jumped very substantially. It does not augur well for what will happen in this country, to put it mildly.

Most of the information presented here was downloaded from Johnston’s Archive, an invaluable web-based source of historical abortion information for a wide range of countries.

Johnston’s Archive is compiled mainly from official statistics supplied by each country’s Department of Health. Abortion data in the Archive are based on these.

It is well known that official statistics underestimate the true figures. Illegal abortions will not feature, nor abortions from self-administering abortion pills. The Irish data are mostly based on women giving Irish addresses in British hospitals and clinics, and some Irish women may have supplied British addresses instead.  The official Portuguese data do not include illegal abortions at home, or abortions obtained abroad.  I take these deficiencies into account in the trend analysis below.

Why look at Portugal?

I concentrate on Portuguese data here for the following reasons:

The abortion ratio is the number of abortions per 1000 live births. Thus, for example, an abortion ratio of 50 for Ireland, where there are about 70,000 live births in a year, would indicate that about 70×50 = 3500 abortions occur in a year among Irish-resident women. This is roughly the number who travel to Britain for an abortion each year. Further down I add an estimate for use of the abortion pill and Irish women giving false addresses in Britain.

Official abortions in Portugal rose by about 6000 between 2006 and 2007, and I assume that this increase occurred in the 5 ½-month period after legalisation from mid July 2007 onwards. This translates to an increase of 13,000 abortions in a full year.

I use the figure of 13,000 abortions obtained by Portuguese women, illegally at home or by going abroad, for each year prior to 2007 in Figure 1 below, that is, I have re-calculated Portuguese abortion ratios by adding 13,000 to the official abortion numbers for each of these years. I have also added 7000 (estimated 6 1/2 months’ illegal abortions) to the 2007 figures.

The Irish abortion ratios also need to be adjusted upwards. In Figure 1 below, I have increased the official Irish abortion ratios by 50% to allow for Irish women giving non-Irish addresses; this is likely a gross over-estimate, but I am setting the estimate high enough to avoid argument.   Numbers taking abortion pills can be estimated from numbers accessing relevant web-sites, and the current estimate for the Republic of Ireland is about 1000 abortions under this heading.  This represents an increase in the abortion ratio of about 14, and I have applied this increase to the Irish ratio for 2011-2015, but not for the years before that, because importation and use of abortion pills is a relatively recent phenomenon.

Figure 1 below shows the abortion trends after making these substantial upward adjustments in Portuguese and Irish abortion ratios. The basic message here is that the Portuguese ratio increases following legalisation of abortion in 2007, whereas the Irish ratio is stable post-2007, and much lower than the Portuguese ratio. 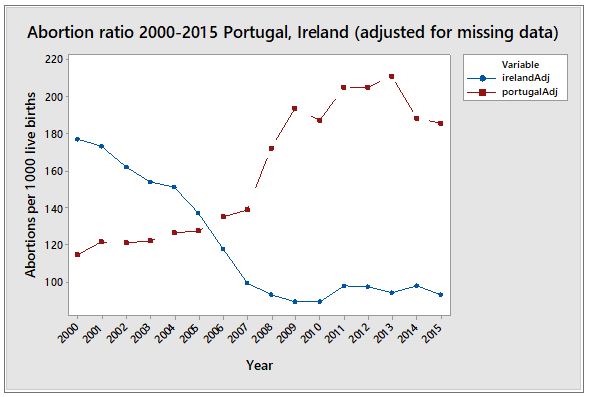 Based on Portugal’s experience, legalising abortion in Ireland will increase the abortion ratio here to about 180 (representing at least 12,000 abortions per year), and this will happen within two years of legalisation.

[1] Melo A. (2017) Social Impact of Abortion Decriminalization in Portugal, School of Business and Economics Maastricht University.

Note: This paper has made different assumptions – in particular, about annual numbers of live births – than the recent actuarial report commissioned by the Pro-Life Campaign. That report was based on 2016 Irish birth and abortion data, whereas I used a larger figure of 70,000 live births in my analysis, to allow for Irish population growth. Also, I based my analysis solely on Portugal, whereas the actuarial report used an average of seven countries’ abortion rates (including Portugal), and also assumed that Irish rates would increase gradually over a four-year period. The more conservative assumptions in the actuarial report account for the lower estimates of Irish abortions than I have calculated here. The basic message is the same in both reports, of course – if we allow unrestricted abortion up to 12 weeks, and restricted abortion after 12 weeks, then our abortion numbers will rise dramatically.