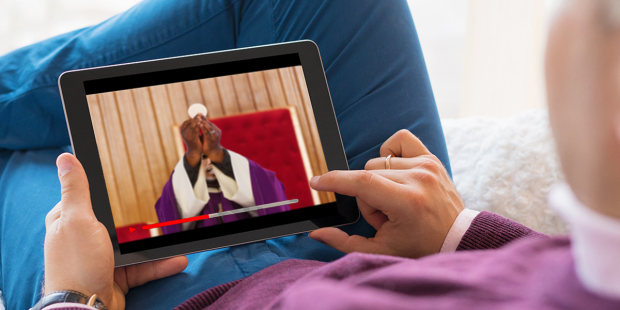 The number of people watching religious services online or on TV has risen to 36pc in the current lockdown, according to a new Amarach Research opinion poll. The figure in the first lockdown 12 months ago was 27pc, which is equivalent to the number who were attending Mass on a weekly basis before the start of the pandemic.

The poll, which was commissioned by The Iona Institute, also found that almost half (47pc) of regular Mass-goers would attend Mass today if they could, despite the ongoing pandemic.

This is the third such poll we have commissioned, One has been conducted during each lockdown. The situation is unprecedented, as you know, and we are the only organisation in the country trying to track what is happening to religious practice in the present situation. Your support has made this possible.

Details of previous poll results can be found here and here.

When public worship was permitted over the summer, almost half of those who had been going on a weekly basis previously, had returned to Mass by September, an Amarach-poll last year found.

Most of the remainder stayed away out of fear of Covid-19.

The new poll also found that 57pc of regular Mass-goers went again over Christmas, and 24pc of the overall population.

Commenting on the latest poll, David Quinn, head of the Iona Institute said: “The fact that the number of people watching religious services either on TV or online has actually risen somewhat compared with the first lockdown a year ago is encouraging”.

He went on: “You might have expected that weariness with the situation might cause people to switch off, but the opposite seems to have happened. Obviously, a lot of people find solace in this way”.

He added: “At the same time, almost half of Mass-goers want to return to public worship now. Given the age group of those who mainly attend religious services, including Mass, this is a high number.

“Ireland is one of the very few countries in Europe currently banning public worship completely. The vast majority of countries in the EU permit it with limits on numbers, because they know it is safe. During the summer, thousands of volunteers in parishes and other places of worship successfully ensured that safety measures were properly followed.”

Quinn concluded: “Both NPHET and the Government have previously admitted that they have no direct evidence to justify the ban on public worship. It is disproportionate and should be lifted in line with almost all of Europe. At a minimum it should be permitted again once we drop down out of Level 5. Under the current Government plan, it will not be allowed until Level 2, which could be months away