Interview with Arch. Diarmuid Martin on reopening the churches for public celebrations 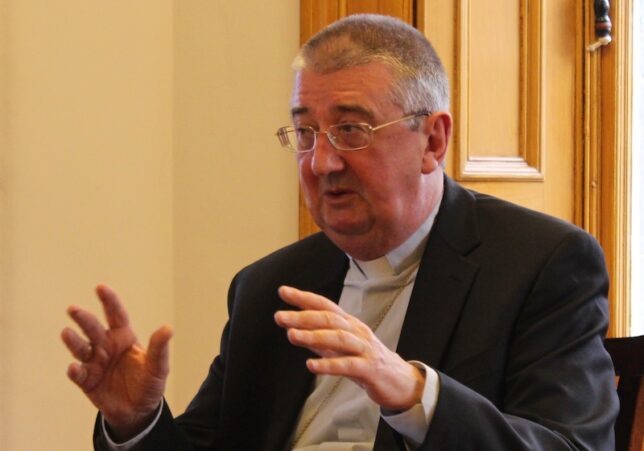 This is the full stranscript of an interview given by Archbishop Diarmuid Martin on Today with Sarah McInerney (RTE Radio 1), on 13th May.

SMcI: What churches will look like in the new normal?  Archbishop, thank you very much for joining me this morning. You have suggested that churches should start looking at a detailed plan for full reopening. What would that involve in your view?

DM: It will involve precisely having a plan to see exactly how you can arrange that people can come to churches and safety is respected. Some people will simply say that it’s just a matter of putting numbers on benches and saying there are so many, but people that have to get to the church. In an ordinary Sunday before this about 200,000 people came to Mass every Sunday in the Dublin diocese. That’s a huge movement of population, when that returns to that situation. So you have to be very careful to make sure that anybody who comes to Mass in church will feel safe and everybody will be responsible see that happens. You have to have, for example, separate entrances, you have to have hand sanitizing at every entrance and that will take time so maybe you will have maybe queues outside churches. So, every church is different. We have some very very large churches and we have some very small churches. So, the first thing we have to do is measure your church and see what would be the safe number of people they will be able to come to any individual church on a particular Sunday. I noticed that the Swiss authorities gave as an indication, it will be probably be about one third of the current numbers. If you look at for examples of those countries where the opening of the churches for public services is scheduled, the measures that have been introduced are very strict and very rigid. For example, in Italy everybody would have to wear face masks in the church, the church’s vessels, and microphones and benches have to be sanitized. But we are working on it.

DM: If, for example face masks are becoming obligatory in closed spaces, I think you may be looking also in churches.

SMcI: If, as you say, in some churches there will have to be a 30% reduction of the normal congregation, how do you keep people away?

DM: There are two things. In the interim period you can simply say: look the Sunday obligation isn’t there. You can come to Mass any day of the week and this will spread out.  You’ll have a second Mass in a particular church but you have to sanitize the church between the two. At the moment churches, many churches in Dublin are open for private prayer, in some parts of the country they closed them all together. In Northern Ireland the government closed all churches. They have been reopened yesterday for prayer but private prayer means people can come in safely, stand, not touch any surface, and so on. It’s a complicated thing, we don’t have a police force, we don’t want to have a police force? But the question is: if the church is open, who can come in? In a Dublin city centre church people could come in on a visit. So, the size of the reopening of churches for worship has serious public health concern and we have to be sure that we are ready for them.

SMcI: On that basis, do you think it’s likely Masses will resume before the end of the year?

DM: I think it’s possible. I mean I’ve spoken with the Government on this, if we’re ready I think one could look at it but you’re talking again about very large people gatherings of people indoors. Sporting activities are outdoors and we just have to make sure (….) There would be a lot of people who will not come back because they’re afraid. I’ve heard a lot of people will not come back at the beginning because they’re being cocooned, what so we have to have a plan ready and look and see how you can address it.

SMcI: And a lot of those people who are not going at the moment, they are watching Mass online and on television. Do you think that trend will continue then, even when the Masses return?

DM: I think they will, on the other hand the Pope said that whereas these virtual Masses are very important, they are not church.  Church is about people coming together. The danger about the virtual experience is it can be very passive. In the long term, the question I’m asking isn’t so much about when can we have the churches open and get back to that line of business, I think we have to ask the question ‘what Church are we looking at?’ After one of the referendums I said that this was time for the Church to do a reality check, an internal reality check as to where it is. I think we have to do a second reality check now and try and see what sort of Church are we going to be, in a very changed Ireland. What way are we going to be present in society? (….) We’re certainly not going to go back to the way we were in the past. I was very tired I was very struck by the title of the book read last year. It was called “Haunted by Christ” and I think we are going to move into a society in which we have many people who are non-believers but maybe haunted, they are maybe asking the questions about Jesus Christ and we might have others who are believers and go regularly to church but need to be haunted by Jesus Christ. They need to come out and see what sort of (….) We have to have a society, I believe, in which believers and non-believers have respect for one another, listen to what people are saying and we have mature believers in a society , and mature non-believers in a society. To me that’s the big challenge.

DM: It isn’t and what we can see it is people experience at funerals at the moment.  I’m really saddened at the tragic situation that people have funerals where people just can’t come together. Who like to get married in a church like that?  In a situation where you can have to be two meters apart? And then the reality is that everybody has to take responsibility to live in that post-Covid society and to live with it as long as it lasts. I’ve no idea, we have no idea when this is going to end in long term.

SMcI: From a practical perspective, one of the downsides of people not been able to go to Mass is that people aren’t able to put money in the collection box. Is that causing a financial problem for parishes at the moment, for priests?

DM: Of course it is. The support for priest and for other church’s events comes primarily from the freely giving gifts of people and in churches. There’s been a drastic fall inevitably and we don’t know how long it’s going to take. We have introduced an emergency measure, a temporary measure, for until Masses begin to take place again, a reduction in priests’ salaries up to 25%. I believe most priest have spoken to me saying that many of their parishioners are facing a much worse situation. People have lost jobs and as a temporary measure this is a reasonable thing to do but we have then to come back and rebuild. The church has a lot of staff and employees and we have to generate the income which will keep that going in the future.

SMcI: On that basis, would you like to see parishioners make donations when they can, maybe online.

DM: We’ve been very hesitant in the situation to go out and start talking about money because of what most people are facing but there are ways in which people will be generous if they are approached in an appropriate way and we’ll see how that will work in the coming months.

SMcI: Just in terms of nursing homes and obviously the very tragic situation there in the last couple of months, would you like to see priests been able to get back into nursing homes to give the Last Rites?

DM: I think if it’s safe for them to do that, it should be done but the important thing is nobody’s life should be put at risk, neither the priest nor (….) and it applies the same to house visits. We will have to find a way to dialogue and make sure (….) In the hospitals, hospital chaplains are doing a great work, they are part of the hospital staff, they protected, they’re trained. You know, you can’t have people working into nursing homes who are not trained, they’re not ready to face it.

SMcI: What about graveyards? Because a lot of graveyards have been closed during the lockdown. What’s the current situation with that, are graveyards still closed to people?

DM: No, you can go from a small country church where the graveyard is just beside the church and they’ve been open, except in Northern Ireland where, again, the law prevented that. For example, in Dublin The Glasnevin Group have now opened the church for the bereaved at certain periods. They have opened the graveyards for a period of time. They are always worried about large groups coming and suddenly arriving together into the graveyard and it would be difficult to manage. There is a group working at the Department of the Taoiseach in which the religious leaders are present and looking to make sure that everything can be done, to ensure that those who are bereaved and grieving, we can do what is the best for them. I really feel (….) just about what is coming back from your partner’s, your spouse’s funeral and you have to be cocooned, locked up, you can get (….) and the other hand they’ve been abuses and people are sometimes arriving in large numbers and that again we can’t take risk on this.

SMcI: Yes, befor we all get back to normal

DM: You know, but when are we going back to normal? That’s the other question.

SMcI: We’d all love to know the answer to that question.

You can listen to the interview here: https://tinyurl.com/ybxbjnt3