Justin Trudeau’s socks and the contradictions of multi-culturalism 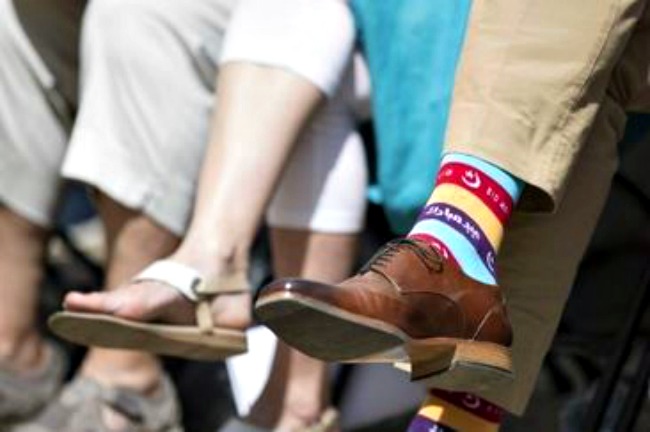 Justin Trudeau is the insufferably trendy, attention-seeking, virtue-signalling Prime Minister of Canada. One of Trudeau’s gimmicks is wearing specially made socks designed to draw attention to whatever is on his mind on any given day.

For example, on May 4 he wore a pair of Star Wars socks because apparently May 4th is ‘The Force be with you’ Day because people can say ‘May the Fourth be with you’, or something like that. In fact, he wore his Star Wars socks when meeting Enda Kenny. You wouldn’t catch a stuff-shirt like Enda wearing socks like that. Never mind that they distracted from the whatever it was they were discussing. The point is that Justin could look cool again.

In any event, while at the Toronto Pride Parade at the weekend, Trudeau decided to wear another set of specially minted socks, this time to celebrate the Muslim festival of Eid Mubarak, which marks the end of Ramadan.

This struck me as Justin trying way too hard. Again. But in fact, his choice of socks at that particular event highlighted inadvertently some of the internal contradictions of multi-culturalism. If there are two movements on the planet today which are further apart in terms of many of their core values than Islam and the LGBT movement (a branch of the sex revolution and liberal individualism), I would like to see them.

Islam is even further away from the sex revolution than Christianity is in terms of its attitudes to women, to homosexuality, and to sexual relations and the family generally. In places like Iran and Saudi Arabia homosexual conduct can be punishable by death.

When Justin Trudeau wears those socks he wants us to ignore inconvenient facts like this, and to pretend that deeply contradictory cultures can live peacefully, side by side without ever clashing now or in the future. To point this out would be regarded as grossly impolite. Instead we are invited to cheer.

If Trudeau wore socks bearing a Christian symbol at such an event, I doubt people would be so forebearing. Why the difference? The reason is that Muslims are a minority in countries like Canada, and Christians are not so regarded, even though in Canada practising Christians are, in fact, a minority.

Once you are classified as a minority, your beliefs no longer come into the picture and the way the beliefs of one minority can totally contradict the beliefs of another must be passed over in silence. All minorities are equally good. This is why Justin Trudeau can wear his Eid Mubarak socks to a gay pride parade and expect that no-one (or no-one who matters) will question his decision.

PS. On Twitter yesterday, with tongue-in-cheek, I wondered whether he will wear Easter socks next year, just to be consistent, and was criticised for the suggestion, and also for bothering to draw attention to his socks at all. But Trudeau wanted to draw attention to his socks. That was the point of them! Let him wear his specially minted socks anywhere he wants, but he wears them as political statements and they deserve comment as such.