Knowing God’s existence is not simply a matter of faith 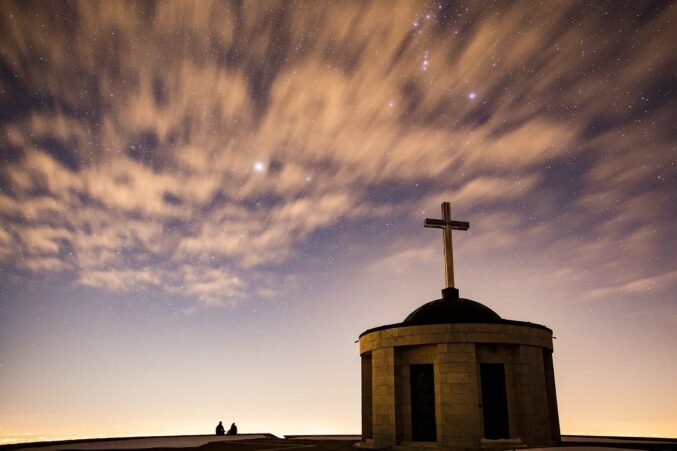 Many think that God’s existence is something one can affirm only as a matter of “faith”. It is thought to be something subjective. Theism is often considered, even by Catholics, a leap in the dark. This is not the teaching of the Catholic Church. She teaches that the existence of a divine Creator is a truth that we can know “with certainty from the created world by the natural light of human reason.”

This was the de fide (‘of the faith’) teaching of Vatican I, reiterated by Vatican II, and one of the first dogmas of the Church presented in the Catechism of the Catholic Church (see CCC, paragraph 36). Vatican I’s Dei Filius quoted a key Bible verse as backing for this teaching, which is not a view held only by Catholics but by many Bible-believing Christians too. (But only Catholics hold it as a de fide dogma.) The biblical verse is Romans 1:20, where St. Paul tells us that God has made His existence known to all people, even the Gentiles, through the things He has made. Following on from this New Testament verse, and other biblical passages and the whole Christian tradition, the Church teaches that God has revealed in nature something significant about himself and his reality and power, so clearly that we can be fully confident of it. This is a teaching about God; it is also a teaching about reason. The Church is championing human reason, so to speak. She teaches as a matter of faith a truth concerning human reason and its ability to come to know the reality of God’s existing as the one, spiritual, all-powerful and all-knowing, free and generous Creator.

Let’s call this (Catholic) Rational Theism. A corollary of it is that theism is not entirely a matter of Catholic or Christian faith. Of course, theism can be a matter of faith for some, even many: that’s not denied by the Church. God has revealed truths that we could know by reason so that we can know these truths even more firmly and easily by faith. This includes the truth of God’s existence as Creator. There’s nothing wrong with holding this truth by faith. But not all matters of Catholic faith are entirely matters of Catholic faith. Some matters of faith are matters also of reason. There are some things we could know even if we did not have Sacred Scripture, Sacred Tradition, or the Church’s teaching. God’s existence is one such thing. It is not just that we could guess at it, or have a strong feeling or sense that it might be true, or hope that it might be true, or imagine that it might be true, or make believe that it is inspiringly true. It is, according to the Faith, a certain truth of reason. God has revealed himself in the things he has made, in his creation, and if we use our intelligence correctly, we can know with certainty that God exists.

It could be said that this teaching is both a marvellous affirmation of human intelligence and also a strong affirmation of the intelligibility of nature. The Church affirms that intelligibility goes all the way down, so to speak, right to the very foundations of reality. So, there is a natural fit between human intelligence and objective reality. This is not to assert that we humans can understand, or will sometime in the future understand, everything about reality. Catholic Rational Theism does not deny the reality of mystery, and, especially, the Mystery of God. The God that reason comes to know is beyond our powers of imagination or conceptualisation. We do not and cannot know what God is in himself. But we can know something about God and how he is related to us, and how we are related to him. Some things we can know by reason; others we can know by faith and reason; still others we can know only by faith. Regarding the latter, for example, we can know only by faith that God is a Trinity of persons, that the Son became man in Jesus Christ, that the Virgin Mary was the Mother of God, that Christ died for our sins, that the Church is his body, and so on. These theological mysteries can be known only by accepting divine revelation in history, a revelation that takes us beyond the much more limited natural revelation found in God’s creation. But we should not forget that the God who makes himself known to us so richly in this historical divine revelation has also made a more limited but still important truth known to us by natural revelation: that he exists as Creator and Lord.

Acknowledging Catholic Rational Theism carries important implications, and overlooking, ignoring, or, worse, denying it leads to serious problems. One such problem is fideism, the view that everything about God and religion is a matter of faith alone. It seems to me that fideism is alive and well today, even though the Church has condemned it as inconsistent with Catholic faith. But fideism can seem like a ‘handy’ way to affirm God’s existence without having to assert that it is a matter of reason that any and every rational person should affirm. (Of course, two other ways of avoiding any assertion of God’s existence as rationally knowable are atheism and agnosticism. Both are alive and well today too. Furthermore, agnosticism and fideism are very closely related.) People might wish to avoid Catholic Rational Theism because they simply don’t have confidence in reason’s being able to know of God’s existence with certainty. But surely Catholics shouldn’t lack this confidence, seeing as it is a definitive belief of Catholicism that God’s existence can be known by human reason. Even well-meaning and committed Catholics may not be fully aware of the teaching, however, or have worked out its implications.

And it may seem that Catholic Rational Theism is too risky or even that it is ethically suspect. If one takes God’s existence to be a matter of reason, is one thereby implying that the atheist or agnostic is stupid or wicked? Surely that would be unacceptable, a lack of respect for intelligent people who in good faith, so to speak, cannot bring themselves to believe in God’s reality. In answering that objection, we may note that there is no reason to think that Catholic Rational Theism implies any such accusation of atheists or agnostics. There is no difficulty for the Catholic Rational Theist to acknowledge the difficulties in arguing for God’s existence, and the serious objections to belief in God, even whilst holding that reason can in principle know of God’s existence with certainty. St. Thomas Aquinas acknowledged that. One can affirm others’ intelligence and good will even whilst disagreeing with their use of their intelligence and will in some matters, even very important matters. But what about the idea that to assert religious certainty is dangerous, a source of arrogance, fanaticism, coercion, and even violence? Wouldn’t we be better off to treat religious ideas, including theism itself, in a humble and modest fashion, avoiding any hint that things are objectively certain or definite? In answering this objection, we may note that Catholic Rational Theism does not necessarily lead to any arrogance, fanaticism, coercion or violence. In fact, the commitment to rationality that is at the heart of Catholic Rational Theism is itself an integral dimension of a genuinely non-violent, ethically sound, and genuinely humble approach to resolving conflicts and searching for true unity and harmony. Catholic Rational Theism goes hand in hand with reasoned and civil discussion, dialogue and debate.

There are serious implications for Catholic schooling arising from Catholic Rational Theism. For one thing, as Catholic Rational Theism is foundational for Catholicism, a dogma of the Faith, Catholic schools should be devoted to a rational theistic approach to understanding reality and understanding education. This includes how one is to understand the human person, human reason, and religion. Catholic schools should not consider the question of God’s existence to be a matter entirely of faith, especially if faith is understood in a way that separates it from reason. The Catholic school’s commitment to rationality, in all its dimensions, goes hand in hand with a commitment to theism and to rationally theistic religious education. Catholic Religious Education will involve attention to Catholic ‘faith development’, for sure, but this will not exclude complementary attention given to ‘reason development’. Such development of reason will include a confident approach to the God question, which, in light of the Church’s championing of reason and its ability to come to know of God’s existence as Creator, will be seen as a question allowing of a firm answer drawing not only from faith but also from human reason. Confident theism should be a trademark of every Catholic school, an integral aspect of its ethos. This theism should be seen as the complement of a confident faith in human reason and intelligence, and in the order and rationality of human nature and of nature more widely. This is a richly inspiring and supportive and challenging vision of the human person and of the world, and of rationality, fully at home in a school setting. Of course, things will be very different in a school that does not commit to the existence of God as a matter of reason, but which adopts an atheistic, agnostic, or fideistic philosophy or ethos. Catholic schools should dare to be different, and their theistic difference should be allowed, and even affirmed, in a truly pluralistic country.

Dr. John Murray is Chairman of the Board of Directors of The Iona Institute, and is a lecturer in Theology at Dublin City University.

[This paper is based on a chapter written by the author, published in Seán Whittle (ed.), Irish and British Reflections on Catholic Education (Springer, 2021).]