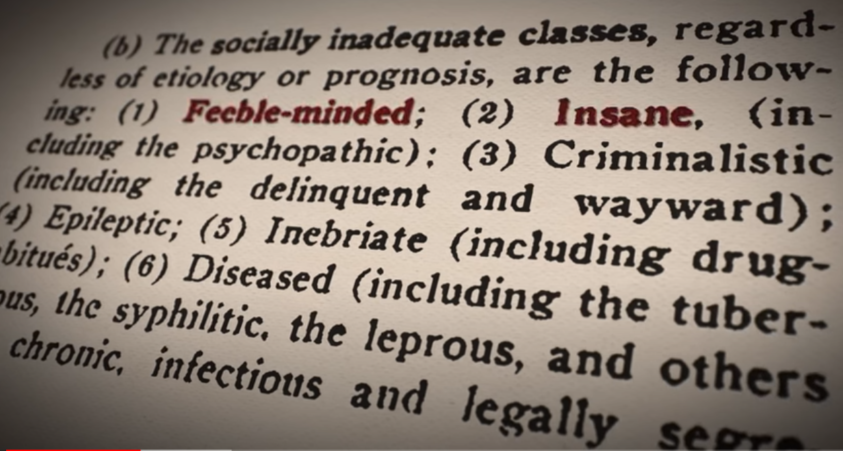 Among the many other things it examines, the report on the Mother and Baby Homes published last week looks at how other countries in the past treated unmarried mothers. It throws a spotlight on how various countries in the first part of the last century promoted eugenics, which frequently targeted unmarried mothers, labelling them ‘feeble-minded’, often incarcerating them, or even sterilising them. This was done in the name of ‘science, not religion’.

This is an issue The Iona Institute has previously highlighted. The report presents examples of countries that introduced policies and legislation inspired by eugenic ideology, which seeks to ensure only the ‘fit’ are born.

It says: “In the early-twentieth century a number of countries legalised the non-consensual sterilisation of women who were believed to be ‘feeble-minded’ or behaved immorally, including unmarried mothers.”

The countries it lists include the US, Canada, Switzerland, Denmark and Sweden.

It points out that in the US as late as 1968, a “total of 27 US states had compulsory sterilisation laws.”

It quotes a study which says: “The more recent application of eugenic legislation [in the US] was punitive or economically motivated as in the case of women with illegitimate children supported by welfare payments”.

About Switzerland, Denmark, and Scandinavia in general, it states: “In the aftermath of World War I, in order to protect society against ‘a visible dissolution of sexual morals among women’, the Danish authorities opened an institution on an island, close to Copenhagen, where ‘slightly imbecile, erotic girls’ were confined and sterilised. It was widely believed throughout Scandinavia that ‘the “degenerate” were more promiscuous, had more children and threatened social order’. In Switzerland, where compulsory sterilisations were carried out on the basis of agreements between local authorities and doctors, most sterilisations were carried out on ‘unmarried, socially deprived women with children born out of wedlock who were categorised as “maladjusted”, ‘sexually promiscuous’, ‘mentally disabled’ or ‘feebleminded’”.

In the UK, in 1913 the Mental Deficiency Act created the category of “feeble-minded person” that was used to incarcerate or put in institutions women who had children outside of marriage and could become pregnant again. (See more here)

After World War 2 in Britain, out-of-wedlock births were taken as “a prime example of something which interrupted the proper functioning of social processes, and revealed a failure of social control, the control of individual behaviour by family and kin, by political and education authority, by all the influences which persuade most people to obey the established order. The conditions which were associated with high illegitimacy levels in any one locality tended to be thought of as pathological, and the individuals who engendered bastards as in some way victimized, disordered, even mentally abnormal.” (The report is quoting here a writing by Martine Spensky).

About the Netherlands, the report says: “From the mid-1950s the moral-religious discourse was replaced with a psychiatric discourse in which the single mother was no longer represented as a sinner who had to do penance, but as a woman suffering from psychiatric illness.”

What was the main voice of opposition to eugenics and sterilisation in this period? It was the Catholic Church.

The 1930 papal encyclical Casti Connubii reiterated Church teaching against divorce and artificial contraception, but it was also one of the most important documents of its times condemning eugenics which was becoming more and more popular across the political spectrum.

If the Catholic Church did not exist, would Ireland in the 1930s have embraced eugenics and compulsory sterilisation of anyone considered ‘feeble-minded’ as countries such as Sweden did? It’s a question worth contemplating.