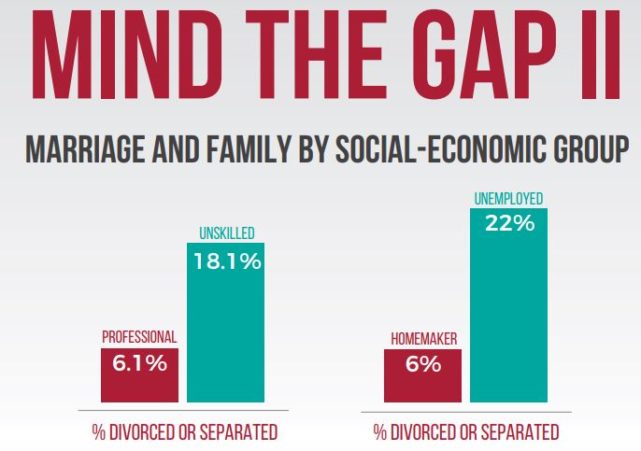 A new report from The Iona Institute called ‘Mind the Gap II’, shows that unskilled workers are more than three times as likely as professional workers to be divorced or separated. The divorce and separation figures are 18.1pc and 6.1pc respectively. (See Note 1 below).

The report is a follow-up to a paper issued by The Iona Institute in 2016 which showed that marriage rates also differ hugely by occupational status and social class. It found that unskilled workers are only half as likely as professionals to be married (66pc vs 32pc). (See Note 2 below).

Put together, we see that unskilled workers are far more likely to have suffered a broken marriage and far less likely to be married in the first place compared with upper income workers.

The huge discrepancy shows occupational status and social class make a huge difference to whether someone marries and then stays married.

The figures in the new report are derived from Census 2016.

For example, only 6.1pc of homemakers are divorced or separated compared with 22pc of unemployed people.

With regard to nationality, Indians are by far and away the least likely group living in Ireland to be divorced or separated at just 1.9pc. This compares with 17.1pc for Britons living here, 21.7pc for Lithuanians and 28.1pc for Latvians.

Commenting on the figures, Professor Patricia Casey said: “The new report shows that economic and cultural factors both appear to have a very strong influence on the likelihood of someone going through a divorce or separation. Low income is a very big predictor of whether someone will experience a broken marriage. Conversely, those on high incomes are far less likely to have done so. A difference of three to one is extremely significant by any reckoning. When we combine this with the fact that only 32pc of unskilled workers aged 18-49 are married in the first place, compared with 65pc of professional workers in the same age group, the picture becomes very stark”.

Professor Casey continued: “We can also see cultural factors are at work. The differences in the divorce and separation rates for different nationalities living here shows this. The very low rates for Indians versus the much higher rates for Britons cannot be due to economic factors only, but must also be the result of social factors, possibly cultural resistance to divorce among Indians and widespread acceptability of divorce among British people”.

She added: “Ireland might be having a referendum on divorce in May. But we need to have a wider debate about marriage in general. We need to look at the role socio-economic factors and cultural attitudes play in driving the divorce rate. It should be obvious from the figures in the new report that economic inequality causes a very big marriage gap between the social classes as well. We need to investigate whether State policy can play a role in reducing the marriage gap”.