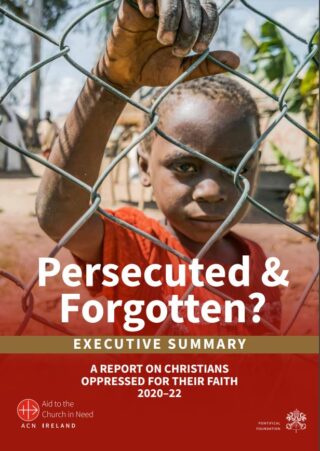 An international Catholic charity has released a major report highlighting the worst examples of Christian persecution over the last two years.

Aid to the Church in Need, Ireland, launched the report on Red Wednesday, the annual day when ACN raises awareness of the plight of persecuted Christians and encourages prayer on their behalf.

‘Persecuted and Forgotten? A Report on Christians oppressed for their Faith 2020-22’, highlights some of the most shocking examples of Christian persecution, from massacres in Nigeria and Ethiopia to the abduction of Christian girls in Pakistan to the arrest of Cardinal Zen in China.

Among the key findings, in 75 percent of countries surveyed, the oppression or persecution of Christians increased. In Africa, the situation of Christians worsened in all countries reviewed, amid evidence of a sharp increase in genocidal violence from militant non-state actors, including jihadists.

In the Middle East, continuing migration deepened the crisis threatening the survival of three of the world’s oldest and most important Christian communities located in Iraq, Syria and Palestine.

In Asia, state-authoritarianism has been the critical factor causing worsening oppression against Christians in Burma (Myanmar), China, Vietnam and elsewhere. At its worst, freedom of religion and conscience is being strangulated, as in North Korea.