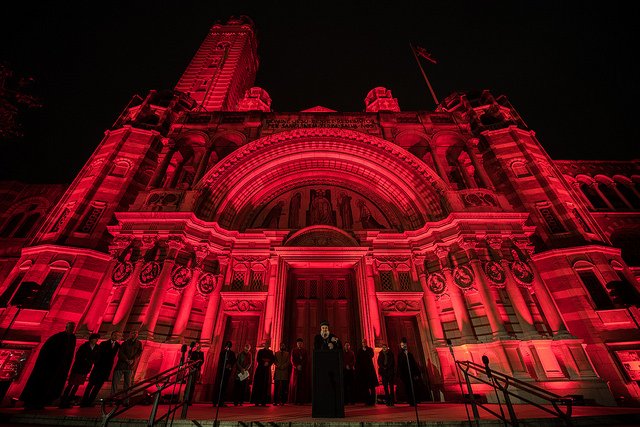 Forced conversions, lost childhoods, years of hiding, living in limbo — the persecution Christians face around the world was given specific, concrete shape by the testimony of survivors at the annual Red Wednesday vespers in Toronto’s St. Michael’s Cathedral Basilica. Red Wednesday, organised by the Pontifical Charity, Aid to the Church in Need (ACN), is being marked November 23rd in Ireland and Britain.

“The first thing they did was forcefully convert us to Islam,” said a 16-year-old Nigerian survivor of kidnapping by Boko Haram, the northern Nigerian terror group whose name means “Western Education is forbidden.”

Taken with 21 other children when she was seven-years-old, Maryamu Joseph is recovering in a trauma centre set up by the Diocese of Maiduguri with help from Aid to the Church in Need. Aid to the Church in Need sponsors the annual Red Wednesday event to commemorate persecuted Christians worldwide. The annual event sees cathedrals and parish churches around the world bathed in red light after dark. St. Michael’s and Montreal’s Mary Queen of the World Basilica were Canadian churches taking part in the Nov. 16 event.