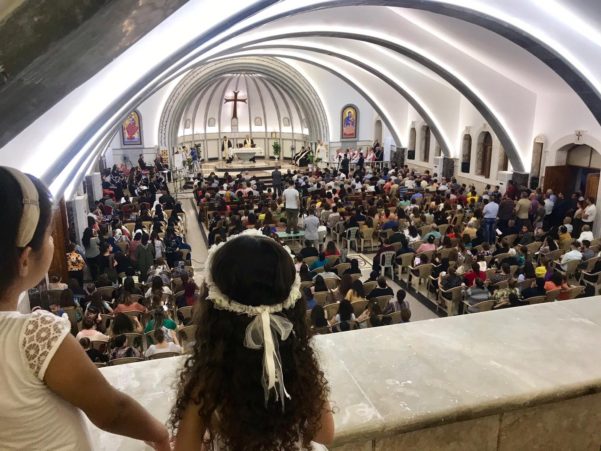 An Iraqi church damaged and defaced by the Islamic State in 2014 was rededicated last Thursday for the parish’s celebration of the Feast of the Assumption of Mary.

The Syriac Catholic Church of Mar Behnam and Mart Sarah in the Iraqi city of Qaraqosh welcomed Archbishop Petros Mouche of Mosul, priests, and the local Catholic community to celebrate the solemnity.

Archbishop Mouche rededicated the church’s altar, which had been burned by the Islamic State. After renonvations and rebuilding, the interior of the church, once charred black by fire, has been painted white.

Five years ago on the August Feast of the Transfiguration, the Islamic State devastated the city of Qaraqosh in Iraq’s Nineveh Plains causing Christians to flee the region.

“In 2014 we left our churches and our homes. The city had about 50,000 Christian inhabitants,” Fr. George Jahola told Vatican News in an interview published Aug. 15.

Now the Christian population in the city has been reduced to half of what it was. About 26,000 Christians have returned to Qaraqosh, Jahola explained.

The Church of Mar Behnam and Mart Sarah was charred black and its bell tower was demolished. “But we never stopped imagining how beautiful our church would be, once fixed,” Fr. Jahola said.