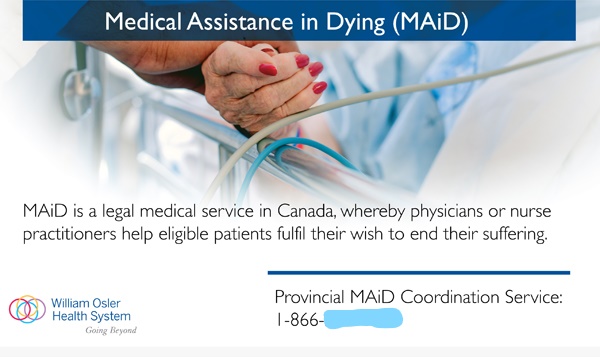 Increasing numbers of people killed by euthanasia are supplying a “boon” for organ transplant surgeries in Canada, according to an Ottowa newspaper. But politicians and ethicists have said the practice was “rather horrifying” and raises questions of “coercion.”

From January until November of 2019, there were 18 organ and 95 tissue donations from patients who died by euthanasia in Ottawa, representing an increase of 14% over all of 2018, and 109% compared to all of 2017. In total, they accounted for 5% of the province’s overall number of organ and tissue donations, more than double their share of the 2017 figures.

In Ontario, the Trillium Gift of Life Network “proactively” solicits patients to discuss organ donation once they have elected to be killed. It is provincial law that Trillium be made aware once a person has been approved to end their life.

McQueen cited the scenario of a patient who opts to begin the euthasia process at home and be transferred to a hospital for organ donation as one that sparks “even more ethical and legal problems.” In this case, a patient would essentially be sedated at home and then transported to a hospital for the final dose of lethal medication and then have their organs removed.

“That situation makes it clearer that the focus is truly on ‘harvesting’,” said McQueen. “The donor’s dignity is compromised and the ‘separation’ of teams that is supposed to be the warrant of independence of the teams is completely blurred.”