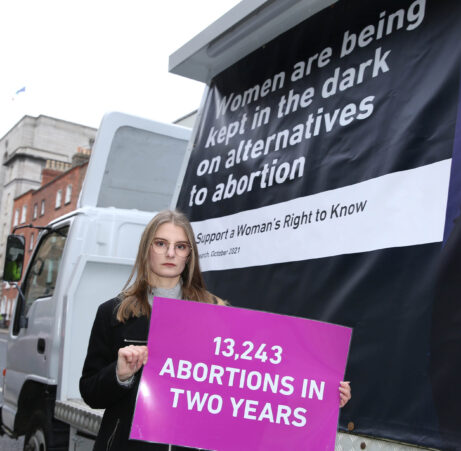 There’s been a call for an open acknowledgement of the ‘devastating impact’ of the new abortion law, and the spiraling abortion rate that has resulted in a huge increase in the number of Irish women having abortions in just two years. More than 13,000 took place in Ireland in 2019 and 2020.

At an event outside the Dáil yesterday attended by several members of the Oireachtas, the Pro Life Campaign launched its new document “Ireland’s Abortion Law: End the Silence”.

The PLC also published the findings of an opinion poll it commissioned that shows overwhelming public support for women being offered information about alternatives before proceeding with an abortion.

A second poll finding shows a massive 77% of people support the abortion law being amended to ensure that babies who survive the abortion procedure are given medical care.

Speaking at the event outside Leinster House, Eilís Mulroy, spokesperson for the PLC, said, “the silence surrounding the devastating impact of the new abortion law must end.

“Right now, women are being kept in the dark about abortion alternatives. They simply aren’t being informed about other options. This appalling situation cannot continue.

She added: “The silence surrounding the reality of babies surviving the abortion procedure and being left to die alone must end. Ensuring that no baby is ever abandoned and left alone to die struggling to catch his or her breath is a humanitarian issue not a political one”.