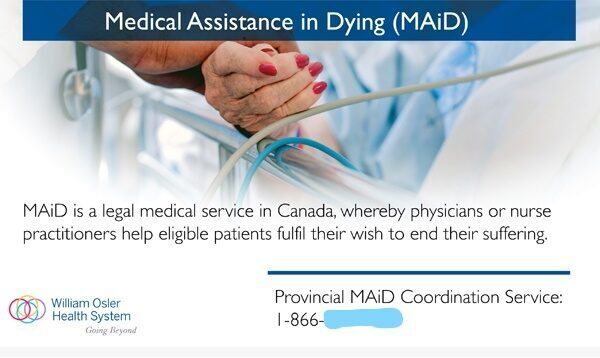 Over 10,000 Canadians died by euthanasia in 2021, 32pc more than in the previous year, according to a new official report. It shows once more that when you open the door to euthanasia and assisted suicide, the numbers availing of them rise rapidly and social norms change. It’s worth look at the report in some detail, because it provides a window into what might happen here in the future.

A figure that stands out is that 36pc of those who died by euthanasia said they perceived themselves to be a ‘burden’ to their family, friends or caregiver. More than 1,700 said they suffered from ‘isolation’ and ‘loneliness’. A compassionate country offers something better to the sick and lonely than death by gas or injection.

Canada introduced euthanasia and assisted suicide for terminally ill people in 2016 and then the grounds for them rapidly expanded.

The total number of those who availed of ‘medical assistance in dying’ (to use the euphemism) since its introduction in 2016 up to the end of last year now stands at 31,664.

The figure for last year represents a tenfold increase compared to 2016 (1,018) and accounted for 3.3pc of all deaths in Canada. There are geographical variations but in British Columbia almost one in every 20 deaths occurs by euthanasia.

The law allows assisted suicide in the form of self-administration of lethal drugs but this happens rarely. There were only seven such cases in 2021. Almost all patients are directly killed by a doctor or a nurse (that is, by euthanasia). The majority (52.3pc) of them were men. The total average was 76.3 years, 77 for women and 75.6 for men.

Legislative changes in 2021 extended euthanasia to individuals for whom ‘natural death was not reasonably foreseeable’. They might have a non-terminal but incurable illness and be far from natural death. They could suffer from a disability or else experience psychological or physical suffering. This is very broad-ranging indeed.

A total of 219 individuals who availed of euthanasia fell into this category. As euthanasia has been available to the non-terminally ill only since June 2021, the figure in the report covers only half of the year, and the number of such deaths will likely double next year and then rise from there.

Only 4pc of the requests for euthanasia were refused because of ineligibility, while about 2pc withdrew their request.

The most common underlying medical condition among terminally-ill patients was cancer (65.6pc) while for non-terminal patients it was neurological (dementia or Alzheimer).

The report does not offer details of the socio-economic characteristics of the patients but we know from other reports – Oregon for example – that white and university educated people are over-represented.

Canada proves that the slippery slope is real and once euthanasia and assisted suicide are introduced, the eligibility criteria expand with time and also the numbers tend to grow.