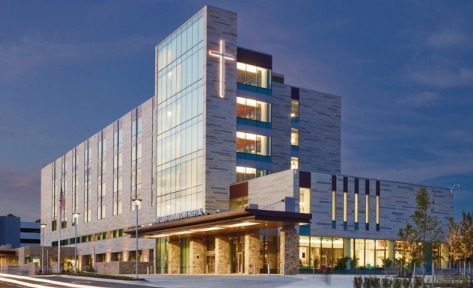 The lead story in yesterday’s Irish Independent, ‘Church-run hospitals told to ditch holy symbols’ refers to the Report of the Independent Review Group that was commissioned by the Government in July 2017 to examine the role of voluntary organisations in publicly funded health and personal social services.

Almost the entirety of the media response to the Report has zeroed in on the findings made with respect to the religious or faith-based ethos of these mainly Catholic hospitals, including the public display of religious symbols.

This is despite the fact that the Review Group makes 24 recommendations covering areas such as the governance of voluntary organisations; engagement and contractual processes between the State and the voluntary sector.

The interpretation or spin given to these findings is that they are representative of an urgent or pressing need or as a response to some great public outcry. The reality however is nothing like the picture that is being painted.

The Report itself is based on the result of a ‘Public Consultation’ which yielded a an underwhelming total of 102 completed consultation questionnaires. The majority of these consultation responses (62 out of 102, or 61%) were official responses submitted on behalf of organisations.

Forty individuals responded to the consultation, of which 24 were affiliated with a relevant organisation but providing views in an individual capacity and 16 were responding in a personal capacity.

The 16 respondents who provided their views in an individual capacity were asked to pick a term that best described them or to provide their own.  Of the 16, nine identified as healthcare professionals, three as carers,  and just one as a service user (which is to say a patient), and three as ‘Other.’

Let me repeat that; just one self-identified patient. This is hardly evidence that can point to a great public demand to remove religious or faith-based imagery in hospital environments.

Indeed, when we dig a little deeper into the consultation process upon which the Report is so heavily reliant the findings are even more revealing.

When asked; “Was the religious ethos of an organisation where you have experienced care apparent in the range of services available/not available and/or the way they were delivered, 75 respondents answered.

Some of the 24 respondents who felt the religious ethos was apparent provided further comments to support their answer. One respondent noted: “The service received was delivered professionally and based on my relative’s need.”

This certainly helps to dispel the semi-paranoid fantasies that some have to the extent that you cannot get an Aspirin in a Catholic Hospital unless you first say a decade of the Rosary.

As noted above, the element of the story that was carried in the Irish Independent today and which has been over-emphasised in the media is the finding that voluntary organisations and health services run by religious orders should be “cognisant of the impact of decor” on patients and “strive to ensure” their personal preferences are met to the “greatest extent possible”.

Yet there is absolutely nothing in the Public Consultation to justify this.

For example; when asked about the impact of Visual Décor, only 12 respondents felt that the religious ethos was apparent through the presence of religious symbols. They noted the presence of chapels, religious icons, logos and posters.

Respondents also noted the presence of a caring, considerate, compassionate environment and ethos. One respondent who had experienced care as a service user noted that “There was a chapel and people visited those who had no visitors. I thought that was nice and added a human touch to an otherwise clinical experience.”

Will any of this make its way into the breathless and hand wringing media and political ‘analysis’? I think we all know the answer to that one.