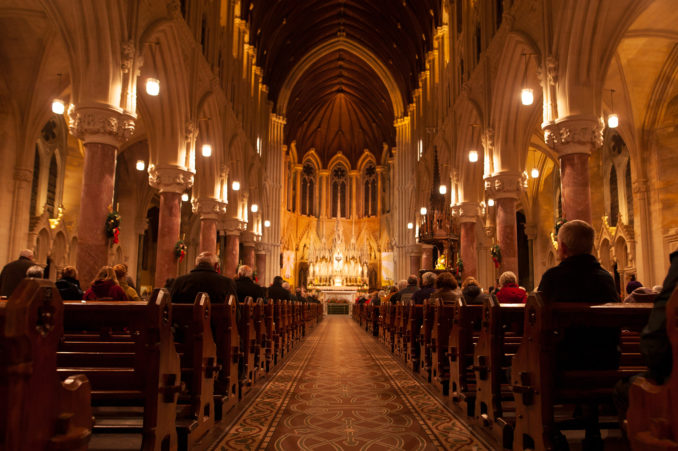 A new study from Harvard University has found that the frequent attendance of religious services dramatically reduces so-called ‘deaths from despair’, such as suicide, and drug or alcohol abuse. This finding seems more relevant than ever given the current pandemic that has resulted in untold job losses and a very uncertain future for many people. Economic slumps are always associated with a rise in ‘deaths from despair’, so if religion acts as a protective against this, then we need to pay attention.

The investigators started with the hypothesis that a weakening in traditional social support systems such as marriage and the family, leads to an increasing sense of hopelessness in many, leading in turn to a rise in “deaths of despair”.

One of the leading examples of such a weakened support system is the decline in religious participation, and therefore the investigators wanted to establish the link between despair and the declining attendance of religious services.

They found that nurses and physicians who attend a religious service at least weekly are less likely to die as a result of suicide or drug or alcohol abuse than their peers who do not attend.

The incidence of ‘deaths from despair’ among health professionals is more than double that of the general population, as a result of stress and trauma, but among those who attend a religious service at least once a week it drops by 68pc among women, and 33pc among men.

As the educational attainment of health professionals is higher than the average, despair in them is associated more with factors such as loss in meaning in life, rather than material deprivation.

Religion often fosters a sense of peace and positive outlook to life, it promotes social connectedness and encourages engagement in prosocial activities, such volunteering. “In the context of trauma, such resources may provide healthy stress-coping strategies and revive a sense of meaning in difficult times and thereby counteract various processes associated with despair.”, the study claims.

This is something to be pondered, particularly in the current difficult times when the general populations is experiencing unusual stress and trauma.

Even if churches are closed for public worship, people are still praying. A poll commissioned by the Iona Institute found that in Ireland 18pc said that they are praying more than they usually would.

Another new poll commissioned by Tearfund, a Christian relief and development agency and a member of the Disasters’ Emergency Committee, found that in the UK one in twenty (5pc) adults say they have started praying during the lockdown but they didn’t pray before.

Eighteen percent of UK adults have asked someone else to say a prayer for them and 19% say they have read a religious text during lockdown. Prayer is a vital part of life for the public, and among those who pray a third say that they have prayed since the COVID-19 lockdown because they believe it makes a difference.

There is a solid body of evidence highlighting the benefit of religion for mental health and the new Harvard study confirms that.

Professor Patricia Casey produced for the Iona Institute a paper called “The Psycho-Social Benefits of Religious Practice”, showing how a large number of scientific papers have established that religious practice reduces the risk of depression, suicide, marital breakdown, alcohol and drug abuse, pregnancy among teenagers. It also helps cope with bereavement effects.

Worship is, for those who believe, a source of consolation and hope, strength and motivation. A church is also a place where they can experience the support of a community and are encouraged to engage in activities that are useful to themselves and to others.

This new Harvard study shows that believers often respond better to the struggles of life, and it brings further evidence to fact that both their religious beliefs and the enhanced social connection that worshiping involves, are good for our health. This is something that secularists often forget.