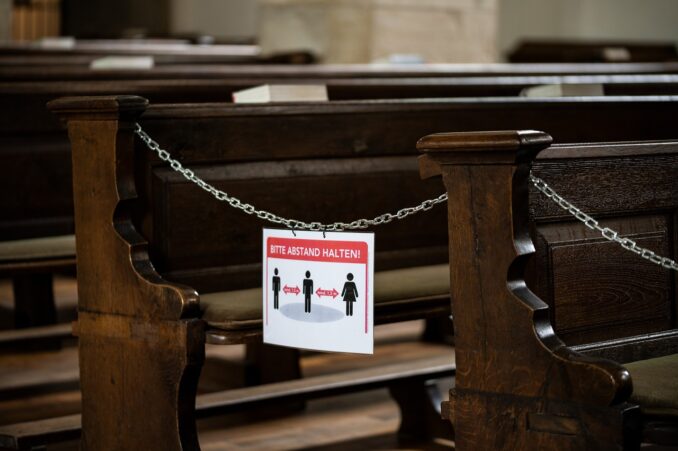 During the pandemic, Ireland prevented worshippers attending religious services longer than any other country in Europe, but at least we haven’t gone so far as to force people to show vaccine passports before attending. Some countries have imposed this requirement, and shockingly, Church authorities are sometimes willing to comply.

In Quebec, for example, the provincial government has enforced a vaccine passport system on all places of worship. Congregants aged 14 to 75 must show proof of vaccination to attend services indoor.

The religious authorities were not consulted before the Government announced its decision.

Some lay faithful organised a prayer vigil to defend religious freedom but the local Catholic bishops, representing the largest Christian denomination in the province, made no objection to the decision.

Cardinal Lacroix, bishop of the archdiocese of Quebec, even voluntarily and unilaterally closed all churches from 23rd December to 10th January as a “strong gesture of solidarity with vulnerable people as well as with the staff of the entire health network and all those who help fight the pandemic.”

This is despite Quebec having a lower number of Covid cases per 100,000 people than Ireland.

From New Year’s Eve the Quebec government has prohibited any indoor social gathering or public worship service, except for funerals. All churches and other religious venues are now closed indefinitely.

The Bishop of Pembroke, Guy Desrochers, wrote a letter just before Christmas, criticising the Quebecois government: “I seriously wonder whether the line between what the State can and cannot dictate to the various religious communities has been crossed with this obligation to present vaccination passports at the entrance to our churches. … Dare to challenge your government representatives to change this latest law which in fact oversteps their role and duty in our society. “ (The diocese of Pembroke is in the province of Ontario, not Quebec).

In Europe, some countries have worship restrictions based on vaccination status.

Luxembourg, for example, requires a vaccination passport when more than 20 are attending an indoor religious gathering. Some priests have protested but Cardinal Hollerich, archbishop of Luxembourg and president of the Commission of the Bishops’ Conferences of the European Union, has defended the government rule.

“During this phase when the pandemic is resurgent, we must save lives, and this green pass should welcome people to Mass, … Some priests have objected, and this isn’t helping the search for a solution”, he said.

Similar measures are in places in other parts of Europe, but the number of people permitted to attend without a pass varies: it is 30 in Slovakia, 50 in Switzerland, 100 in Denmark and Sweden.

In Iceland, for religious events with more than 50 participants a negative rapid antigen is required. A negative test result is also obligatory for weddings and Christenings in Portugal.

In New Zealand, they now have a “traffic light” system  – green, orange and red – based on the severity of the infection.

There has been no pushback from Catholic bishops, but the system has been criticised by some protestant leaders.

“This is something that would be unacceptable from the perspective of the Church, and indeed it would be a contradiction of the message of the Gospel. The thought that someone would be barred from coming to church to hear the gospel is abhorrent.”, said a spokesman for Christian Voice New Zealand.

The six Catholic bishops have set guidelines asking parishes to organise Masses for the vaccinated only but also, where possible, opportunities for people without a pass. It is a two-tier system that favours those who have a pass but does not exclude the others completely.

Religious leaders tend to not object to civil authorities but it is difficult to find a compelling reason for a system granting access to churches based on vaccination status. Churches have proven very safe places to be so long as social distancing and other measures are properly observed.

Making vaccine passports a condition to attend public worship is an unacceptable breach of Church/State separation and it is something no religious leaders should tolerate.