Professor Richard Rex of Queen’s College, Cambridge, addressed a packed University Church in Dublin last week on the topic: The Two Thomases, namely Thomas More and Thomas Cromwell. In particular, he examined the portrayal of both in Hilary Mantel’s best-selling and widely-praised novels, Wolf Hall and Bring Up the Bodies. Professor Rex, who lectures in Reformation and Tudor history, offers a wry, learned and ultimately devastating analysis of how Mantel essentially reversed the personalities and characters of both men.

As Professor Rex (pictured below) says: “They are two of the emblematic figures of English history: More, the defender of the Catholic Church in England against the tyrannical pretensions of Henry VIII to be the Supreme Head on Earth of the Church of England; and Cromwell, the pliant instrument of tyranny. Robert Bolt’s A Man for All Seasons cast More as a liberal hero of freedom of conscience and Cromwell as the ruthless agent of State pragmatism. Hilary Mantel’s Wolf Hall has reversed those polarities for a new age, with Cromwell now the apostle of humanist tolerance and More the hate-filled prophet of religious fanaticism. My aims this evening are to investigate and document this reversal, to show how it was achieved, and to speculate on why it has enjoyed so much success. The key to this final aim is the idea that Thomas More and Thomas Cromwell have, in one little cultural niche, served to embody or represent the changing position of the Catholic Church in modern – or postmodern – western culture. But before we come to that we must unpack and unpick the role reversal and comment on its rationality and plausibility.”

Or as Professor Rex says elsewhere in his address: “To destroy More, the symbol of Catholicism, More must be diminished to the scale of an ant, that Cromwell may trample upon him. Mantel’s fiction shows us a nasty man getting his Tudor come-uppance. History shows us something rather different.” 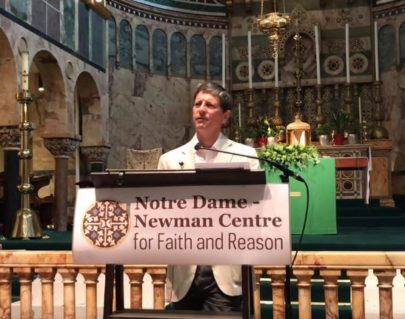 The event was hosted by The Iona Institute and the Newman/Notre Dame Centre for Faith and Culture.

You can find the video of the talk here [1].

The text of his talk can be accessed by clicking here [2].