Twenty years on from the divorce referendum; who was right? 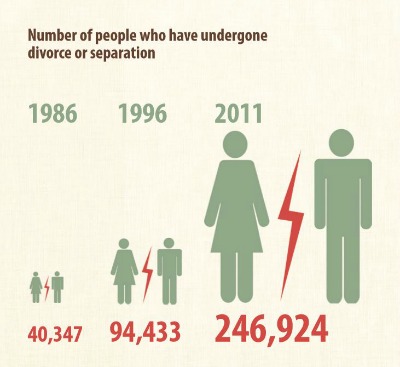 This week sees the 20th anniversary of the referendum that narrowly legalised divorce in Ireland back in 1995.
Various media outlets are marking the occasion, chiefly by claiming that the Yes side was right about the effects of the referendum and the No side was wrong.  (This leader in today’s Irish Times is a good example).

The No side is being chiefly accused of incorrectly predicting that the ‘floodgates’ would quickly open it we voted for divorce and we would soon find ourselves with a divorce rate as high as that of Britain or America.

That has patently not happened. Our divorce rate at present is the lowest in Europe at 0.6 divorces per thousand people per year.

On the other hand, anti-divorce campaigners did not uniformly predict that the ‘floodgates’ would open. The main one to do so was retired High Court judge, the late Rory O’Hanlon.

Leading anti-divorce campaigner, Professor William Binchy does not appear to have made this prediction, for example. His main arguments centred on the injustices divorce would create.

Looking at divorce rate on its own is misleading

In addition, and crucially, the divorce rate on its own does not tell the full story. To get the true level of marital breakdown in Ireland we must add separations to divorces and when we do that, the rate of marriage breakdown roughly doubles.

A marital breakdown rate of one in four is worryingly high.

Yes side wrong on cohabitation and out-of-wedlock births

The Yes side for its part made claims that have also proven to be wide of the mark.
For example, it was claimed that the amount of cohabitation would fall if we allowed divorce. In fact, it has soared.

In its final editorial before the vote, The Irish Times claimed that our failure to introduce divorce in 1986 was responsible for “reducing the number of marital partnerships and increasing the number of children whose parents are not legally contracted to each other.”

In other words, media commentary on the 20th anniversary of the divorce referendum has been far too one-sided and has not properly examined the predictions that both sides made and held the predictions of both sides, and not just sections of the No side to the light of day.

(PS The above graphic is taken from this document which gives lots of facts and figures about the family in Ireland).