The abortion ratio in Ireland varies greatly by county [1]. What is the explanation for this? Is it under-reporting in some counties, population density (in many countries, there tends to be a higher percentage of abortions in cities), or is there another reason? One possible explanation is the type of pre-abortion counselling women receive. In some areas, doctors may be more inclined to discuss with women alternatives to abortion and this could help to reduce the incidence.

Let’s go through some possible explanations for the different abortion ratios (abortions per 1,000 live births) in different parts of the country one-by-one.

(a) Under-reporting of abortion numbers for some counties

There may be under-reporting of abortions in some counties relative to others. In 2020, according to the official report from the Department of Health, there was a total of 425 cases where the county of residence information was not supplied to the Department by the abortion provider. It was supposed to be provided, and it is hard to understand how these providers came to be paid by the Department when the information was not actually provided, but that seemingly is what happened. Because 425 missing cases is a significant number, it is theoretically possible that, if there were large variations in reporting among different counties, this might account for some observed differences in abortion rates. That is theoretically possible, but not likely. If an abortion provider in a particular county consistently fails to provide information to the Department of Health about women’s county of residence, one assumes that the Department would intervene eventually to sort this out. It is more likely, therefore, that the missing numbers are roughly proportional to the number of abortions in each county, and that this is not the explanation for inter-county variation in abortion rates.

(b) Variations in population density in different counties

Sometimes a higher abortion ratio in a county is associated with higher population density in that county, but not always. There are some counties in the same region, and with similar population densities, that nevertheless have widely different abortion ratios. There are also counties with low density reporting much higher abortion rates than counties with higher density in the same region. Appendix 1 below examines this is more detail, but we can say now that the variation in abortion by county does not seem to be attributable to population density and therefore another explanation might be in order, namely the pre-abortion counselling women receive, which could include counselling on other options.

(c) The role of abortion providers

Paucity of official data does not make it easy to find the right explanation for such variation in abortion ratios per county. Nearly 1,000 women changed their minds about having an abortion in 2019. That information was elicited in a parliamentary question (about payments to abortion providers) from Carol Nolan TD. The 2020 data is not yet available.

Are the change-of-mind numbers in each county roughly proportional to the abortion numbers in each county? Are the percentages of women changing their minds much the same for the different abortion providers?  We do not have the answers to these basic questions. Some of this information may be obtained in due course via further parliamentary questions, but is it not ridiculous that such basic information, of such great importance, has to be obtained in this way? There is no good reason for the Department not to include this sort of information in its annual report.

Until such time as this information is made available, we are left to speculate, but different approaches by abortion providers seems a plausible explanation for the inter-county variation observed in our abortion rates. In many counties, there is only a very small number of abortion providers. Some of these counties may have only (or mainly) providers who make a real attempt to provide counselling, and others may have only providers who do no such thing. Those counties, where something approaching proper counselling is the norm, may have higher change-of-mind rates, and lower abortion rates, than other counties of similar population density. This is information that surely has to be collected and acted upon.

It is obvious already, however, that something is amiss with our new abortion regime – even from a pro-choice perspective that ignores entirely the plight of the aborted babies. More than 2,000 women in 2020 contacted the HSE helpline for post-abortion counselling. This is an extraordinarily high proportion of women, about one in three who obtained abortions in 2020, and certainly seems to suggest that at least some abortion decisions may have been rushed through and later regretted.

What else would be expected, given the complete lack of provision for counselling in our current abortion regime, and a remuneration system that rewards GP’s far more for prescribing abortion pills than for managing pregnancies to full term?

Figure 1 shows the 2020 abortion ratio in the Mid-East region, consisting of the four counties surrounding Dublin – all attributed a population density of 101 people per square kilometre by the CSO, based on the 2016 Census. 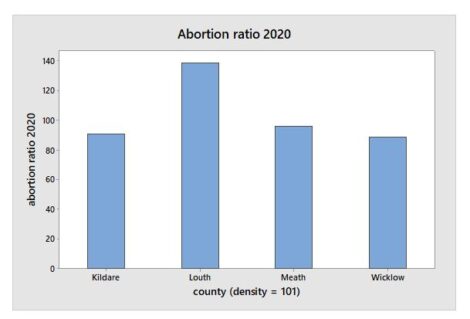 Louth clearly stands out here as having a much higher abortion ratio than its neighbours in the Mid-East region. Referring to the Wikipedia data, it turns out that Louth does, indeed, also have much higher population density than the others. It has, in fact, at 155.4 people per sq km, the highest density of any county in the country apart from Dublin, so a higher abortion ratio is to be expected. But the other three counties in this region have very similar abortion ratios, as is evident from the chart, but they have very different densities: Kildare (131.0 people per sq km), Meath (83.2) and Wicklow (70.2). Kildare is much more densely populated than Meath or Wicklow and might be expected to have higher abortion rates too, but does not.

Figure 2 shows the variation for the four south-eastern counties, all attributed a population density of 59 per sq km by the CSO, based on the 2016 census. Here, too, it is evident that Waterford has a much higher abortion ratio than the other three counties. In fact, after Dublin and Louth, and for the second year running, Waterford had the third highest abortion ratio in the country. 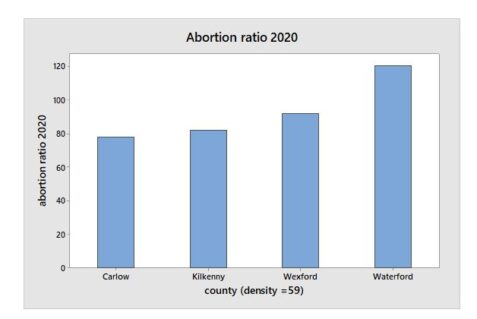 The odd thing here is that Wexford (63.2 people per sq km) and Carlow (63.4) both have slightly higher population densities than Waterford (62.7), but they have considerably lower abortion ratios. Population density simply does not explain observed differences in abortion rates in this region.

Jim Stack is a statistician.