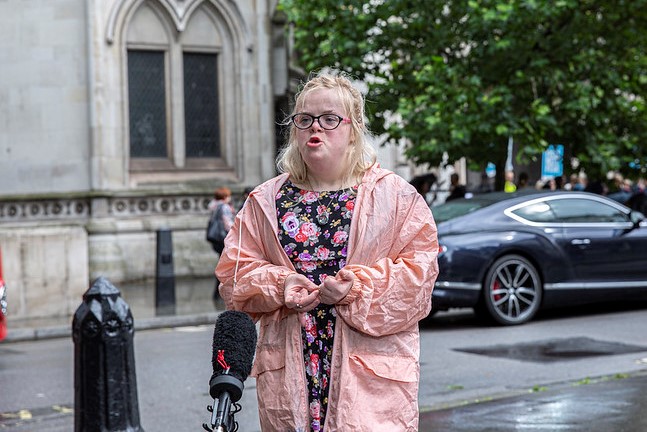 The High Court of Justice in London has rejected a legal challenge against the law that allows babies with Down Syndrome or other disabilities to be aborted up to birth. The applicants will take the case onto the Court of Appeal.

Twenty-six-year-old Heidi Crowter (pictured), an advocate for people with Down Syndrome like herself, and Máire Lea-Wilson, whose son Aidan has the same condition, claim that the 1968 Abortion Act promotes inequality and perpetuates outdated negative stereotypes as it puts no gestational limits to abortion when the baby has a disability.  A legal limit of 6 months applies only to babies with no disability.

The judges dismissed the claim and found that the legislation strikes a “balance between the interests of the foetus and the rights of women”.

One of the two judges in this case has a long record of legally representing abortions providers before becoming a judge.

“This is a very sad day but I will keep fighting”, commented campaigner Heidi Crowter after the ruling. She said she will take the case to the Court of Appeal.

With non-invasive prenatal tests it is now increasingly easy to detect chromosomal abnormalities and the number of abortions on disability grounds is increasing. A study covering the period 2013-2017 showed that the number of babies born with Down Syndrome has fallen by 30pc in NHS hospitals that have introduced this new form of screening.

In Ireland, it is possible to discover if a fetus has a chromosomal anomaly before the legal limit of 12 weeks, using such tests. Nonetheless, the window of time to request and obtain such terminations is quite restricted and many women go to the UK once the limit has passed. We don’t know how many babies with Down Syndrome have been aborted in Ireland under the new law but the number of Irish babies with Down Syndrome aborted in England went from 17 in 2018 to 27 in 2019, reaching 35 last year.

If the Court of Appeal will find the Abortion Act discriminatory against children with disabilities (a form of eugenics), this will have a positive impact on Irish children as well.

A recent study across Europe showed that Ireland had the highest prevalence of live Down Syndrome births in Europe: 27.8 per 10,000 against the European average of 10 per 10,000.

This was one of the positive effects of the 8th amendment but with the new legislation, abortion is becoming more socially acceptable and there are already calls to allow terminations for non-fatal anomalies after the legal limit of 12 weeks.

When the new abortion law was introduced in Ireland, an amendment put down by pro-life politicians that attempted to ban abortion on disability ground was defeated.

A review of the existing legislation is due before the end of the year. The pressure is on to make it even more permissive.

In Northern Ireland, like in the rest of the UK, there is now no time limit to abortion on the disability ground. In March this year, a bill outlawing abortions in case of non-fatal disabilities was introduced by MLA Paul Givan. The Bill passed its second stage and it is still under consideration by the Stormont Assembly. Paul Givan has become Northern Ireland First Minister in the meanwhile but his Private Member’s Bill was transferred to another member and has been allowed to proceed.