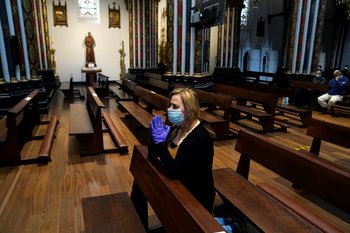 The members of the National Public Health Emergency Team (NPHET) might take some time out of their day to read a ruling by the US Supreme Court that declared new restrictions imposed on public worship because of the pandemic are disproportionate and violate the constitutional right to religious freedom.

In fact, a French court, the Council of State, has likewise struck down as disproportionate a measure in France that limits the number of people who can attend public worship to 30.

At the beginning of October, Governor of New York, Andrew Cuomo, had imposed severe restrictions on public attendance of religious services, namely 10 persons in ‘red zones’ and 25 persons in ‘orange zones’. Note, by the way, that this was less onerous than the restrictions imposed by NPHET under level 3, never mind level 5.

The Catholic Diocese of Brooklyn filed a federal lawsuit against Governor Cuomo but this was rejected.

The Brooklyn dioceses and Agudath Israel of America, representing orthodox Jews, then appealed to the Supreme Court, claiming that the restrictions violate the First Amendment, which guarantees the free exercise of religion and also free speech. They also maintained that the “regulations treat houses of worship much more harshly than comparable secular facilities”.

The Court has accepted both claims and noted: “In a red zone, while a synagogue or church may not admit more than 10 persons, businesses categorized as ‘essential’ may admit as many people as they wish. And the list of ‘essential’ businesses includes things such as acupuncture facilities, camp grounds, garages, as well as many whose services are not limited to those that can be regarded as essential, such as all plants manufacturing chemicals and microelectronics and all transportation facilities.”

The Court touches a key point that is relevant not only to the specific context of the restrictions New York. In every country where a debate about the lockdown limitations has taken place, these fundamental questions have been addressed: What is essential to the life of a community and of an individual? Should religion be deemed as non-essential, or less essential than other activities?

When Dr Ronan Glynn, speaking on behalf of the NPHET, was asked about this at a press conference in September, he said that church attendance is “less important” to society “in the context of a pandemic“.

But this is not a scientific claim. It is an ideological opinion that reflects a questionable hierarchy of values. It is a distinct vision of the world that is enforced by the government’s policies, but it is not necessarily shared by everybody.

Justice Gorsuch, concurring with the Supreme Court ruling, noted ironically: “it turns out the businesses the Governor considers essential include hardware stores, acupuncturists, and liquor stores. Bicycle repair shops, certain signage companies, accountants, lawyers, and insurance agents are all essential too. So, at least according to the Governor, it may be unsafe to go to church, but it is always fine to pick up another bottle of wine, shop for a new bike, or spend the afternoon exploring your distal points and meridians. Who knew public health would so perfectly align with secular convenience?”

The same could be said about Ireland. In the second half of September and into early October you couldn’t attend Mass in Dublin but you could go to the hairdresser or gym or go shopping for clothes.

Gorsuch highlighted the prejudice that lies behind these decisions: “The only explanation for treating religious places differently seems to be a judgment that what happens there just isn’t as ‘essential’ as what happens in secular spaces. Indeed, the Governor is remarkably frank about this: In his judgment laundry and liquor, travel and tools, are all ‘essential’ while traditional religious exercises are not.”

This remark could be extended. It’s not only politicians that consider religious exercises not essential. From what we have seen here in Ireland, even religious believers have too easily accepted the imposition of limits to public worship, without a clear scientific justification been presented.

The US Supreme Court noted that “by effectively barring many from attending religious services, [the New York restrictions] strike at the very heart of the First Amendment’s guarantee of religious liberty. Before allowing this to occur, we have a duty to conduct a serious examination of the need for such a drastic measure.”

It seems that a similar serious examination did not take place in Ireland. It has never been proven that churches are more dangerous to public health than other places that were kept open.

Moreover, no court here has ruled about the constitutionality of the government’s restrictions. Only one case regarding the limitations to public worship has been presented to a court so far, and it has been postponed.

Clarity is needed and even limits must be limited. They have to be justified and proportionate.

From tomorrow, public worship will start again in Ireland with various safety protocols but without a clear court ruling, such as the ones we have just considered, we risk being subjected to a series of recurring limitations to freedom of religion, according to the questionable ideological opinions of those who are in power.

In fact, it is notable that if NPHET had its way, public worship would only have been permitted again for two weeks over Christmas and then promptly shut again. The body still considers public worship to be “less important” in the context of a pandemic.