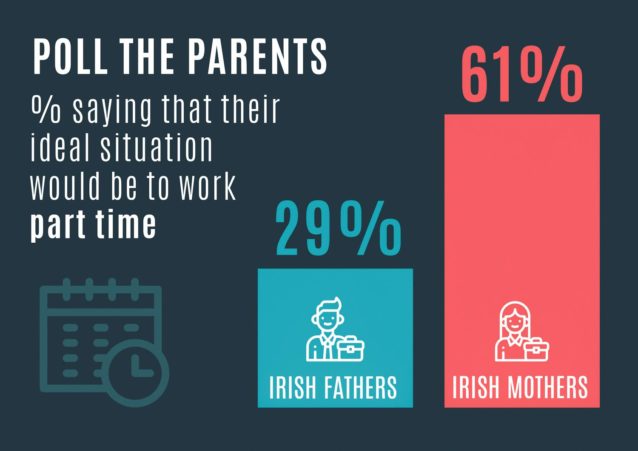 Do men and women seek the same kind of work/home balance? The answer is emphatically not, and public policy ought to take this into account. A new poll finds that 61pc of Irish mothers with children aged 18 or under want to work part-time, compared with just 29pc of Irish fathers. That is a difference of more than two to one. But public policy seems to assume that all parents want to work full-time and put their children into creches for long hours each day.

The survey in question (more details here) was conducted across 11 countries including Ireland. It is part of the Global Family and Gender Survey which comes under the auspices of the Institute for Family Studies in the US. The Iona Institute funded the Irish part of the survey which involved 2,500 adults, including 1,253 parents aged 18-50 with children under 18.

One of the questions asked in the survey was as follows: ‘Considering everything, what would be the ideal situation for you – working full-time, working part-time, or not working at all outside the house?’

As we have seen, 61pc of mothers want to work part-time compared with 29pc of men.  Four percent of both sexes said they did not know.

It’s interesting that only a small minority of mothers with children under 18 wish to be full-time stay-at-home mothers. This is a big change compared with a few decades ago, but a desire to stay-at-home full-time has not been replaced by a wish to be in paid employment full-time. Instead most mothers want to mix and match. They want a roughly 50/50 balance between home and work.

Public policy has a growing bias in favour of putting children in day-care for long hours indicating that the State wants both sexes out in the workplace as much as possible.

The State should instead support parents in whatever they want, within reason, and certainly it should not assume that mothers and fathers want the same thing in this regard. They don’t.

A further thought. Some people might look at the poll finding and conclude that differing male and female desires with regard to paid work are the result of social conditioning rather than any real natural differences between the sexes. But that is a very big leap to make, especially when across many countries the same differences are found.

Indeed, it would take a mighty amount of social conditioning of a different kind to persuade men and women to want exactly the same things with regard to home and work, and who has the audacity to decide they have the right to engineer us in this way, even if it was possible?